Now you are two: Lessons learned from my lucky fin daughter

And now you are two.

I’m not too sure how it happened or where the time has gone. I’m not sure how a pregnancy that felt utterly endless has left me now with a bouncing and all too energetic toddler. I’m not sure how, despite how much I’ve savoured and clung on to every moment, time has still passed.

And now you are two!

I can’t help but think back to when you were born. It had been a scary pregnancy, wondering if you’d be ok. Then a very bumpy arrival meant you were whisked off to intensive care before I’d had a chance to touch you. The first time I properly saw your face it was surrounded by tubes and wires. But your cheeks were restored to a rosy glow, your eyes were bright and your little hand was utterly gorgeous.

I can’t help but marvel at how far you have come and, moreover, how drastically my thoughts and feelings have changed in that time.

What a waste of my time! 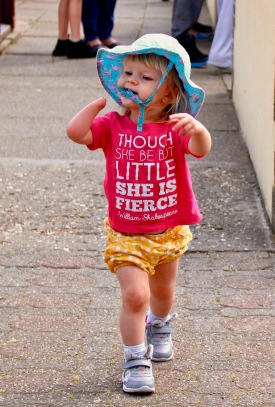 Now I find I don’t often give a second thought to how you’ll get things done. You just will and, to be honest, it’s none of my business how you want to go about it. It’s not my place to step in with my two-handed mind and show you ways I would do it. Because I am not you and most likely, you can do it better. (That doesn’t mean I don’t reserve the right to buy crazy gadgets off the internet to help in your exploration – those random Amazon plate dividers have saved having to sweep up countless peas from the floor!)

I remember worrying about how people would react to you. When you were tiny I was anxious for people to know about your hand before they met you. I just couldn’t bear the thought of seeing expressions of surprise, pity or perhaps worse on their faces.

Yes, sometimes people look at you. They even stare sometimes. But what I’ve learned in the last two years is that they’re actually staring at your smile. At your personality. At your vitality and zest for life. If they even notice your hand it’s usually with wonder at the fact they never noticed before. Some still stare at your hand and I do my best to ease their minds, but some people simply won’t be helped and, provided they’re not being too rude, that’s their problem and not ours.

“It’s that moment when you watch a friend’s small child grappling their two perfect hands around a toy and you realise that your daughter, however normal, however confident, just won’t be able to do it that way.” – Trying to find a little peace of mind, 2016

No, she won’t do it that way. And, you know what, I don’t mind that much any more. I watch her grappling in her own way and I am filled with such a fierce pride I don’t think I could even begin to express it. It’s a feeling I try not to convey too openly as I can’t help but feel the pride is tinged with a little bit of a brag; it’s a sense of “look what my kid can do and with ONLY one hand!” Then I have to try and resist doing a socially-unacceptable air punch of celebration.

“It’s that moment when you stop and realise that you and your husband won’t be able to hold your daughter’s hand at the same time.” – Trying to find a little peace of mind, 2016

I remember when this thought hit me during pregnancy. It was a bit emotionally crushing at the time, complicated as it was by a fear of the unknown and a good dose of anxiety and depression. You could have told me then that I was being ridiculous but I’d have internally shouted you down, all the while I nodded and agreed to your face.  But now, the idea – while painfully real at the time – seems utterly ludicrous to me.

When I reach out to take her little hand (she prefers you to hold her left – but that’s been a bit tricky since I broke my right!) I can feel her little paw – that tiny pad of muscle just past the wrist – bend and curl into mine. Holding her little hand and having her hold mine, feeling the gentle press of her tiny digits against my palm, is without a shadow of the doubt the most beautiful feeling in the world.

There’s also no doubt in my mind that these years will be golden ones. She’s young enough to not be aware of her difference in a social sense yet old enough to explore and adventure with the best of them. She reacts with surprise and a little confusion if kids grab at her hand and marvel at it (my reaction tends to be a little more visceral). She’s yet to understand why they’re curious or to question why she doesn’t have two hands as well.

Yet I’m certain her brain knows that she’s adapting. Even now, at two years old she’ll try to reach out with her little hand if you offer her a second toy or snack to hold. Even now she’ll reach for it and touch the object with her lucky fin and there will be a moment of processing and realisation that this set up simply isn’t going to work. Then she swiftly switches hands, she clamps the first object against her chest with her lucky fin and she’ll reach out to take the second with her left hand.

These are the years where we can marvel in her achievements and bask in her sense of unshakable normality. I know a time will come when she’ll start to notice the difference. The time will come when a kid will ask one question too many and perhaps that sense of insecurity and doubt will start to creep in. I dread the day when I have to see that bright, worry-free face crumple a little bit. I dread the frown of confusion and injustice.

And yet now I feel stronger, I feel better equipped and armed for when that time comes. When we first found out about her hand the fears felt insurmountable. And now they’re simply a bridge to be crossed and we’ll follow her example to get across them.

Despite the future worries about confidence and fitting in, I no longer worry about her ability. Not at all. I don’t waste a second of my time wondering how she’ll get something done. When I was pregnant, when I was in a darker space and I found it difficult to accept positivity about a scary situation, I hated hearing it. The positivity made me feel my feelings were somehow invalid and unjustified.

It’s surprised me to look back and see that nothing anybody ever said would or could have made me feel better at the time. Nothing anybody could have told me would have taken away those fears and reassured me, no matter how experienced or expert they were. The only thing in the world that’s been able to do that is Hero. She’s shown me, moment after moment and day after day that she is more than just fine. She’s proved to me that I don’t need to worry about her or what she’ll do. She’s demonstrated repeatedly that there is another way and that she’ll find it. 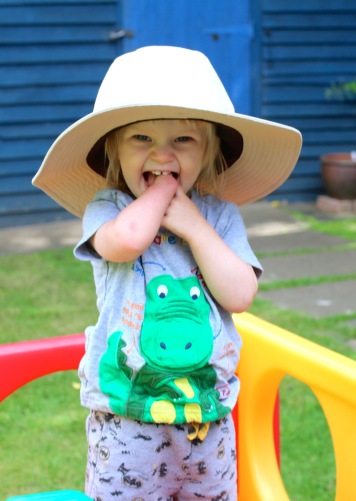 ThoughSheBeButLittle A teacher by day, a writer by night, a dinosaur enthusiast all the time. I'm overly obsessed with my growing menagerie, including Bagheera the cat, Merlin the dog, Le Fou the guard chicken and our foster pups. I'm also the mother of a wonderful daughter, born in 2016 without her right hand but with a whole lot of heart.
Published August 5, 2018August 5, 2018

One thought on “Now you are two: Lessons learned from my lucky fin daughter”