Finally, a game that makes me madder than Monopoly

I suffered a complete sense of humour failure in a supermarket last month. I was knackered after a long day and I was probably a tad hormonal. I had stopped off for some groceries on my way home and, as I always do, I took a stroll down the toy aisle. I passed a standout-shelving unit with about thirty copies of the same board game on it. 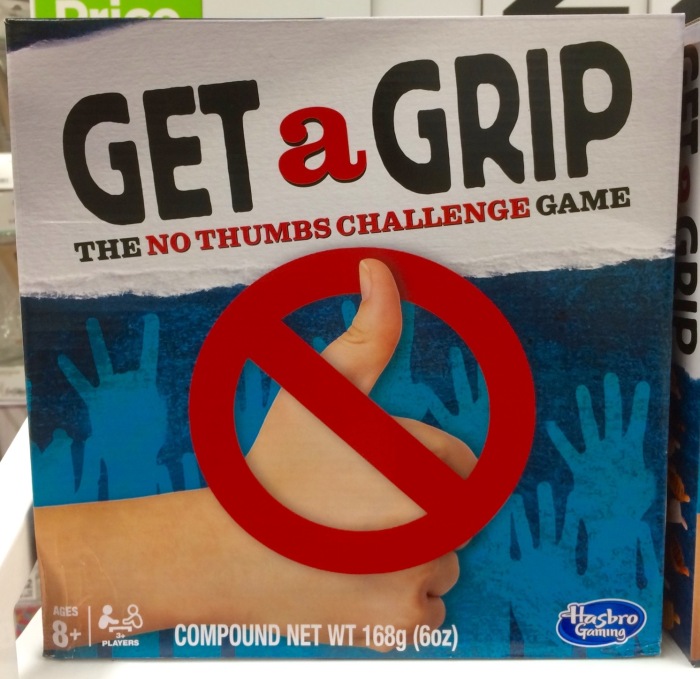 The game was called ‘Get a Grip’ and it was a ‘hilarious’ family game that required you to wear restricting bands around your hands to remove the use of your thumb while you completed certain tasks, such as writing, drawing or sculpting. I know, I could have walked past and thought nothing of it. But I was not in the passive mood, so I took down the box.

Hilarious? Enter expletive of your choice, hilarious? I almost marched to the check out, stamped my foot and demanded an explanation from the poor late-night duty manager. With the luxury of hindsight I appreciate that many, in fact probably most people in the world would find no reason to take offence at a game like this. But on that day I was woefully lacking in a wider perspective. I was looking at that game from the point of view of a parent of a limb different child, a child who will one day struggle with these same simple tasks, and for whom it will be anything but funny. I was looking at it from the point of view of a mother who, despite loving every single thing about her little girl, feels fiercely protective of her and can only hope and pray that she’ll love herself as much as I love her.

Like picking at a niggling scab, I obviously had to Google the game as soon as I got home. As I scrolled through the advertising images my heart got a little more raw, a little more rageful. One of the photos was of two children trying desperately to button up a shirt with no thumbs and laughing at the sheer hilarity of it all. 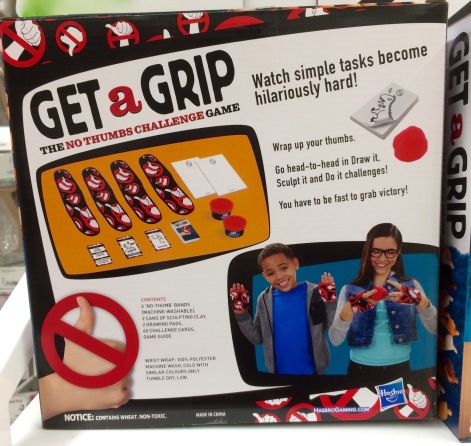 I didn’t find the idea of struggling to do simple tasks that most of us take for granted very funny at all. I kept thinking back to the many videos I’ve seen of young kids with a limb difference learning to do up their own buttons, or to tie their own laces. I kept thinking of the utter pride and joy on their faces that spoke volumes of the perseverance and the effort that had gone into obtaining that goal.

Needless to say, I’ve calmed down a bit since then. I never did draft the furious letter I was thinking about sending, both to the store and to Hasbro Gaming. I spoke about the game with many people whose opinions mean the most to me and I realised that my frustration, while probably entirely justified on a personal level, just wasn’t worth acting upon.

I can’t expect the world, this decidedly two-handed world, to conform to my every concern. While I’m so embroiled in the limb different community that sometimes seeing two-handed babies looks a little odd to me, I need to remember that Hero, and those with a difference like hers, are but one in over 32,000. They are beautiful and a rare gifts. The world isn’t able to completely cater for every single difference out there and as one sage friend pointed out to me; should my rage about this game mean that ‘Pin The Tail on the Donkey’ and three-legged races should also be banned? They all take enjoyment from enacting a physical impairment after all.

On another level, this game could actually serve to raise awareness about what life with an upper limb difference might be like, all the while bringing a laugh and a smile. Of course, growing people’s understanding while they’re having fun can hardly be a bad thing. Even though it’s ok for me to be a bit mad, it’s also important to acknowledge that this game wasn’t invented with any kind of malicious intent in mind (or so I hope). Maybe I just need to see things from a different angle; maybe I just need to get a grip myself!

ThoughSheBeButLittle A teacher by day, a writer by night, a dinosaur enthusiast all the time. I'm overly obsessed with my growing menagerie, including Bagheera the cat, Merlin the dog, Le Fou the guard chicken and our foster pups. I'm also the mother of a wonderful daughter, born in 2016 without her right hand but with a whole lot of heart.
Published January 21, 2018January 21, 2018